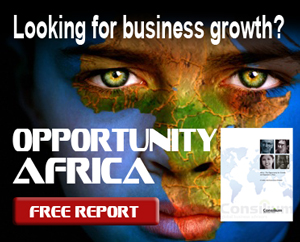 "The great thing about Africa is that there isn't any competition.  Be part of the wave!" That's how Jason Njoka, CEO of iROKO Partners, Nigeria's fastest growing internet company described Africa during the HBS Africa conference in 2012.

But you know that will change quickly.  You were probably late to the BRICs, and may have even become disillusioned with them.

But Africa.....here American SMBs have an opportunity to ride the wave.  Do you have a strategy?

It's a green field!

Download the whitepaper today to learn about this amazing opportunity

It's a continent...not a country

Africa seems to be so far removed from the markets where American companies prosper.

Did you realize that Africa has: