How many languages do you speak?  How many do you read and write?  Probably not more than 1 or 2...and when was the last time you bought a product based on sanskrit derived descriptions of how it would help you?

News Flash - the other 6.99999999999 billion people in the world might not want to buy based on just your language - no matter how perfect your company literature looks in American English.

And remember - this isn't only about selling for export.  Really savvy companies are learning how to use language as an effective tool to support their domestic sales.  Did you realize that "Spanglish" is the 2nd most spoken language in the US.  It's true - this isn't an April Fools.


7 Bn people in the world...and most can't understand you

With more than 30% of the world’s population in China, Chinese is on the top of the list. It has several dialects and is spoken as a first language by some 835 million people. An additional 100 million speak it as a second language.

The Spanish colonized much of the world leading to many Spanish speaking countries. There are 329 million people who speak the Spanish language.

A huge colonial influence can be seen as the root to the spread of the English language. It is estimated the 310 million speak English.

It is spoken throughout the Middle East. 221 million people speak Arabic, but it has large regional variations.

Want to learn more about language, translation and marketing localization? 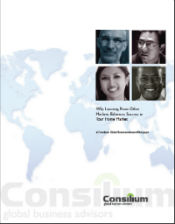 Wendy Pease is the Executive Director of Rapport International, LLC a full-service translation and interpretation company based in metro-west Boston, Massachusetts. Founded in 1987, she bought the business in 2004. The company offers foreign language translation and interpretation services in over 100 languages. Ms. Pease is also an expert on diversity training and international marketing communications.