Santi Lopez | Feb 29, 2012
Earlier this week we touched on increasing globalization in investing.  Where Sir John Templeton first ventured one now finds many dabbling.  When assessing export markets one considers different criteria than company investments.  However macro trends, which often form the basis for a single security recommendation, can be central to an international business development market selection process.

The article, Top 5 Latin American Stocks for 2012, by James Vohwinkle 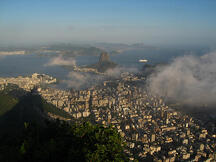 Though challenging "head winds" exist, Latin America remains a dynamic and vibrant region.  Abundant natural resources and increasing interconnectedness and globalization are supporting the rapidly expanding middle class.  There are compelling commercial opportunities and as the article highlights, some likely winners among Latin American stocks that the writer is bullish about.

Of course not.  And Vohwinkle could be wrong.  The stocks could fail to perform, or exceed expectations, just as the markets themselves may.

One fact is clear, however.  Global investors increasingly seek prudent diversification.  In that pursuit they are much like international business people.  The goal of international business expansion is to anticipate trends and market growth, and identify the key opportunities for one's product.  There will be mistakes, however, so balancing expectation against downside risk, and blending opportunity profiles across regions, countries or even metro areas is critical to the long-term success of an international business development initiative.