Tonight's debate should be entertaining if the feistiness of last Tuesday's is any predictor. *

Boca Raton, Florida will be the site of tonight's tangle on "Foreign Policy."  Now I'm realistic - I understand that most of the discussion under the rubric of foreign policy will focus on military and security explicitly.

But if there was any merit to vonClausewitz's contention that "war is merely an extension of (national policy) by other means", and Cobden's postulation that free and mutually beneficial, vibrant global trade is one of the strongest drivers of peace, then we should also expect some perspective from each candidate on how they intend to facilitate international commerce for American companies.

I'm not offering political opinions here - don't take this the wrong way.  But it's worth considering what background each brings to this topic.

Of course the bottom line is that political risk is not exclusively an external factor.  Our own government's approach to international trade topics creates uncertainty as well.  What should we watch for?

What topics would we ideally learn the candidates' positions and thoughts regarding?  This is hardly an exhaustive list, but representative.  There's a place for comments below.  Add yours to the list!

Globalization - can we step past the populist rhetoric to look at this?  We want our companies to succeed.  We know that international success requires local knowledge and focus.   We further know that the most rapid consumption growth is happening elsewhere in the world.  Therefore many of the operations that are opened overseas (and jobs that the subsidiaries of American companies create in those locations) are established to serve the local markets - NOT for the purpose of low-cost outsourcing.  This is a distinction worth noting.  Will they?

Additionally the securities regulations under which American companies operate create substantial exposure for the companies as well as their executives and directors.  The fiduciary responsibilities for which they are accountable include maximizing profitability to the extent legally permissible and strategically prudent.  How will companies which don't pursue cost cutting 'off-shoring' strategies be indemnified against frivolous suits by opportunistic 'investors'?

Finally, much of the opportunity which Romney's Bain Capital seized, arose during a window which emerged when low-cost competition from Asia spurred American businesses to take a creative and entrepreneurial approach to the science of management and operations - dramatically increasing productivity and efficiency.  This involved streamlining companies so that they could compete globally, both through basic efficiency as well as strategic focus on areas of particular value and expertise.  So in a sense the rise of China led to the management evolution which Bain (and others) leveraged.  Could be an interesting point for Romney to make as he tries to "talk tough" about Chinese competition - essentially we can out-compete them with our creativity.

China - just how intertwined are our fates and interests?  The ASEAN focus of the Obama administration, and the rising tension in the South China Sea are noteworthy.  This 'silk road' crossroads sits between India & China and astride strategic shipping lanes. Questions of intellectual property rights, currency manipulation, labor practices, predatory tariffs, unfair domestic practices, etc. are all questions to consider - as are the implications of the proposed solutions.

FCPA - the capricious enforcement of this regulation under the supervision of Lanny Breuer has created substantial risk and uncertainty for American companies.  It's simply not enough to follow the rules because the rules haven't been (despite lots of promises to do so) clearly articulated.  The recent action against Oracle highlights the uncertainty companies face.  How will the candidates address this issue?

National Export Initiative - Doubling exports from '10 - '15 was a strategic goal that Obama announced during his State of the Union speech in '10.  Initially it looked as though American companies would succeed.  Recent analysis looks more problematic. Will the candidates double down on this initiative?  Abandon it?

Commercial Service and SMB support -  American companies are generally hesitant to export.  Local assistance (guidance, advice, counsel) in local markets is a critical factor in success.  The Department of Commerce Commercial Service supports that.  But relative to other nations which excel at export, the level of support is far lower.  Compared to Germany, for instance, anecdotally the level of support at the Shanghai office is approximately 15 representatives of the US vs. over 80 for Germany.  And those staffs represent populations of approx. 320MM vs. 80MM.  So by means of a very crude metric the US has 1/21MM citizens while Germany has 1/1MM citizens.

Of course the SBA (Small Business Administration), Ex/Im Bank, State Department (commercial diplomacy) and other executive branch agencies also play an important role in growing sound global sales trade and exports.  How do the candidates envision leveraging these resources in support of our national security?

Free Trade Agreements (FTAs) - Where do the candidates propose to pursue FTAs and how will they present them to congress to facilitate rapid approval and implementation?

Regions of focus - there will likely be plenty of discussion focused on China.  But what about other areas with substantial growth and potential opportunity or turmoil?  Africa?  LatAm? ASEAN?  Eastern Europe / CIS?

Currency - labeling China as a 'currency manipulator' is a potentially symbolic move.  But relative exchange rates certainly impact export opportunities at a macro level.  Most seem to project that in light of substantial internal challenges faced by the Yen and Euro, the dollar will strengthen against those currencies.  But at the same time will remain weak against most others.  But actions by the government impact this deliberately or otherwise.  What do the candidates propose for a currency strategy?

Barriers - Tariffs, Intellectual Property Rights (IPR) and corruption all impinge on the ability of American companies to succeed globally.  But the US erects its own barriers in the form of subsidies for certain industries and restrictions on certain trade.  What clear, blanket philosophy do the candidates articulate on barriers on trade in either direction?  And what of specific issues like the friction with Brazil over sugar subsidies and the impediment to success with a newly minted WTO member Russia as a result of our Jackson-Vanik legislation?

China - of interest will be not so much specific policy suggestions - but the degree to which this is used as a tool for inciting a populist reaction and demagoguing the discussion.

Check back Wednesday for a recap of what we learned and potential implications for global sales opportunities for American companies.  In the meantime if you're interested in the international business development potential for your business, call Consilium to chat.

Wondering what impact a global sales program might have on your company valuation?  Check out our eBook on the topic. 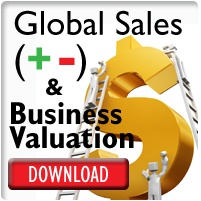