For those of us that are advocates of digital marketing for manufacturers and B2B sales growth, it's easy to focus on the outcomes (since the ROI is what drives most programs and distinguishes inbound marketing from traditional "marketing.")

Ultimately that accrues to everyone's benefit - at least nearly everyone.  But it overlooks the angst that even a simple inbound marketing implementation creates in a company.

It begins with understanding who's impacted by the change, their likely perspective, and whether the ultimate consequences will be positive or negative for them personally.  After all, while nearly every business that "does it right" benefits, there are some folks that end up left behind.

A 2013 Strategy&/Katzenbach Center survey of global senior executives on culture and change management found that the success rate of major change initiatives is only 54 percent.

The three key issues around change management which tend to derail efforts included:
None of that should be surprising - Dilbert's hardly the only one to offer commentary on change management (or lack of!) in organizations.  But it's rarely discussed amidst the excitement and projections of a new inbound marketing initiative.  And the second obstacle is often overlooked.

This trips companies up in two ways.  First, as noted, the skills.  Too often inbound marketing is perceived as a set of discrete tasks (e.g. blog posting, social media promotion, SEO) which can be implemented independently.  Second it's assumed (actually often sold as) to require relatively little work.

There's no surer path to failure of B2B digital marketing than simply treating it as a bunch of tasks to be managed in parallel.  Without unifying strategy to guide and synthesize each element, the effort will nearly always flounder - EVEN THOUGH almost 100% of the effort is being expended.  Similarly without the resources (internal or outsourced) to support the volume of work required over the long-term, initiatives will also fail.


Inbound marketing - who's likely to chafe at the change

Let's take a quick look at who may resist the change.

CEO/President - They are accustomed to delegating.  Once they look at the numbers and approve the investment, they'll assume they're going back to the usual assortment of tasks with lawyers, bankers and accountants.  Watch their expression when you tell them they will be writing blogs too, tweeting from their new handle and participating in LinkedIn group discussions.

VP Marketing - You'd hate to be this person....you know the one who's been budgeting and squandering resources on traditional marketing approaches without measurable ROI or even demonstrable results.  Add as the revelations around target customers, value proposition and pain points arise from the work, this individual will likely feel threatened.

VP Sales - Inbound marketing "leads" are awesome - but they are different.  The sales team is going to have to accept the new reality - that the marketing sales continuum has shifted much of the sales responsibility to marketing; AND that a new set of sales skills is required of both management and reps.  They may intuitively understand and embrace the change....or they may protest (probably passive aggressively!)

Marketing Staff - Imagine if suddenly you showed up at work and learned that you were now going to be measured on what you did each day?  That you would have to be accountable to an editorial calendar, and swing way up the marketing skills spectrum from artist to data wonk?  Good folks will quickly come to embrace the new challenge - but not without some trepidation.

Sales Staff - The "right" ones will be thrilled.  And the others.....well that's why you have a sales manager.

Outside resources - Your "PR" agency that writes occasional press releases but has no clue about how to create releases as a form of content, optimized for personas and oriented around campaigns, won't be comfortable as this gets rolling.  Neither will the other "marketing agency" resources you might use for specific design tasks - after all, they'll realize they've missed the boat.

IT - "Oh no...not another integration!" is what they'll think.  And every integration they've ever faced has been sold as simple. They're going to be skeptical, and you won't convince them otherwise.  Just roll with it. 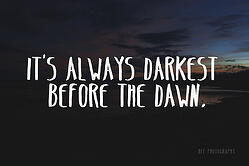 Finally, like every major change initiative, initial excitement wears off quickly as the slog begins.  There is a lot of work to be done, over an extended period of time, before there are likely to be substantial results.  Sure there may be some quick wins and indications of success; but often there is simply hard work and growing skepticism that inbound marketing really will work.

That's the phase during which a change management strategy is critical to the process.  When real success is close, but not quite yet apparent.  (But it's also why a strong B2B manufacturing business background, solid strategy and meticulous execution are critical - because all the work could be for naught if it's simply poorly coordinated effort!)

Not sure if inbound marketing is right for your manufacturing business?  Check out this brief video below, and download our free guide.