This webinar tackles those in the context of today's complex buying journeys. It's critical to understand what's actually happening - otherwise, qualification and forecasting are bound to be unreliable.

Who's Actually Buying? And When?

If your team is going to sell consistently and predictably, then you have to answer these questions:

Who is making the decision?

When and how will the decision be made?

Those questions are getting harder and harder to answer, but doing so is critical to predictable sales.

This 25-minute webinar will unpack this complex topic including:

So companies double down on identifying the decision-maker and trying to reduce the number of deals that end in no-decision.

The decision is Now a Function - Not a Person

Most decisions are now made by a committee - the buying team. And the person who has the "check signing authority" often accepts the committee's consensus rather than overrides them.

So sure, it's true that someone does hold that authority, but it's unlikely they'll wield it.

Complex sales should recognize this reality and figure out how to sell the team.

A Decision by Default is a Decision Nevertheless

No deal ever ends in "no decision." Someone decides. Perhaps they decide not to investigate any further and spend their time elsewhere. That's a decision.

The question is whether your salespeople are able to get that info.

And it's not easy - there are at least five decisions that comprise the typical complex buying journey.

We'll unpack each of them during this webinar.

You won't change buying habits and trends. But you can adapt your sales process and methodology to reality.

This webinar will help you unpack how consensus decision-making is displacing the traditional decision-maker - and all the implications for process and deal qualification.

We'll also explore the five decisions in every complex sales project - including at least three that your team probably just ignores. Understanding those will greatly increase your ability to qualify and close deals and reduce the number that dies without you ever learning why.

We'll keep it to thirty minutes so you can get back to important work - but those 30 minutes will change the way you think about sales today.

Ed Marsh is the founder of Consilium. He works with industrial manufacturers to help them improve revenue growth through improved sales performance, digital marketing, and business strategy. He's written frequently about the challenges and importance of sales CRM and marketing automation systems for capital equipment manufacturers.

Who is Today's Decision Maker? 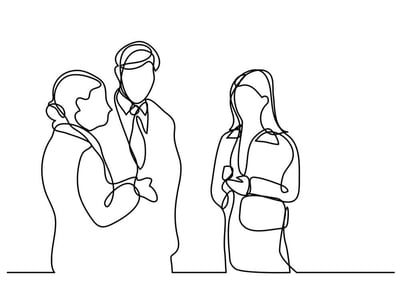