We're not Scrooges, but we can learn similar lessons

Hi, I'm Ed Marsh. Welcome to this episode of Signals From The OP. On this Friday before Christmas in 2017, it's a casual day here in the office. We're going to have a different Signals today, diving into that cherished Christmas story, A Christmas Carol. Certainly it has a dark side to but it's beautiful story of redemption, and I think that there are some relevant lessons in there for many of the manufacturers that I talk to today.

And in the spirit of Signals from the OP, there are no props, no costumes,  no sets or anything like that. This is a simple production of the Christmas Carol, which I'll to narrate and share some insights that perhaps will resonate with you.

You know how the story starts of course. A long day of work (which I don't plan to have here today in the office) but finally Scrooge extracts his last pound of flesh from Cratchit and sends him home with a begrudging, "Merry Christmas". 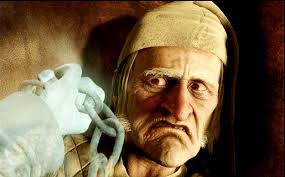 Shortly thereafter Scrooge heads home himself and he's visited by his former partner, Jacob Marley. And that's where we're going to start. I'm going to ask you to envision yourself sitting in traffic on your way home after that last day before Christmas, probably in the office later than you wanted to be. (When you're the one that owns, runs the business and you're stuck there often later than other folks.) As you're driving, you struck by this memory of Phil.

Phil is this guy who you knew from your trade association. He owned another business much like yours and was doing fine for many years. But it failed during the last down turn. And Phil died not long thereafter.

Now, I know you're different and your business is different but as you're visited by him, you see that weary look on his face that characterized him the last couple times you saw him. You sense the stress and the intense emotional pain that you can tell that he's feeling from that experience. It startles you. And you remember the rumors that you heard of, the ordeal he went through and you kind of shutter at the implicit warning that he's bringing you that it could be you too.

Shaken though, you're relieved to pull into your driveway, get into the house, see your wife, give her a kiss, have a cocktail, sit down and enjoy some dinner. And you do some stuff for the evening, watch the 11:00 news, turn in and soon doze off.

And then the dreams start. Maybe it was the cocktail. Maybe it's the memories that you had of Phil, that visit that Phil gave you as you were sitting in traffic on your way home. But shortly after that, here comes the ghost of Christmas past sweeping into your dream. The ghost takes you on a tour of a bustling office. It's an office with where the phones are ringing, sales reps are running to and fro carrying piles of paper. The fax machine is buzzing. You remember the fax machine? That long string of coated paper that would come running out of it like a serpent on the floor, like those old sulfur snakes we used to light as kids that would kind of expand and expand and expand?

It must have been 1990 as you look at it. It was a good year. There's the tree in the corner that has the gifts underneath it that your staff had all cooperated and bought for the Salvation Army family or families that your company sponsored. You watch the scene and you remember at that time in your life your kids were still getting up early on Christmas morning eager to find what Santa had brought them. You realize that was early in '90s and that was probably the last good year before there was really seven hard tough years after that. The dream ends, fortunately. You feel relieved because you were just starting remember the anguish that you had over the personal guarantees that you had written, and which almost got called.

Soon you're back into a deep sleep and then suddenly you're aware of the ghost of Christmas present gently nudging you; or actually maybe not so gently. It kind of feels like maybe when your wife whacks you if you're snoring in the middle of the night. Quickly a series of scenes unfolds as vignettes.

In the first one, there's your VP of Sales. She's at a family party. She's talking to her brother-in-law at this family holiday gathering, talking about how she's looking for a job because she can't possibly hit the numbers you expect her to hit without inside sales support, without CRM, without better industrial marketing including marketing automation and other tools that are so necessary ... She knows they're necessary. It's obvious to everybody, except the guy that owns the company that she works for apparently.

She rants about all the no decision deals, about the bulges in the pipeline, laments the disconnect between the marketing effort in the company and customer service. And you're shocked as you listen to her talk. You thought she was so loyal.

You make a mental note - you're going to have to talk to her about it...but then suddenly you're in the next scene. In this one you see the rising star at your longest term customer. He's leaving the office having just gotten a fabulous review, an annual bonus. He's racing home and calls his wife on the way to give her all the good news, "The review went great, huge raise. We're going to go out to dinner tonight. It's going to be a good year. I promised you a good vacation. We're going to do that."

But he's worried though because one of the first things he knows he's going to have to do is change from that supplier that they worked with for years that just doesn't get it. He's tried to explain that he needs a different solution. He needs a different way of doing it. He can't just have this transactional relationship anymore. And he knows that's going to cause friction with his mentor. Because his mentor has had such a long and loyal relationship with that vendor. But he'll deal with that later. For now, he's going to celebrate and enjoy the good news.

As you watch that scene it dawns on you that he's talking about you. That you, your business is "that vendor that doesn't get it" that he's going to drop. "What does he need that you're not giving him?"  you ask yourself." After all you're providing the same value you have for ten years since you originally sold his mentor.

As you're noodling that thought you suddenly you slide out of the dream and back into a restless sleep. Its frustrating because the answer felt close but just out of reach.

Sleeping fitfully again of course you know what's coming next. It's not long before the ghost of Christmas future pays his visit, escorting you on a whirlwind tour.

The first stop, an industrial park, the familiar surroundings. You see your parking spot, your building. But there's a different sign on it. "What's up with that?" Before answering though, you scoot along. You're off to the next scene already. It's a whirlwind tour and you see your former VP of Sales again. This time she's talking with her husband about the incredible year that her new business has had.

And she just mentions in passing, "If only, if only he had listened to me. What we could have done with that business if we'd implemented robust industrial marketing early on!" And that prompts a moment of melancholy for her as she muses aloud about how lean those final years' holidays must have been for you after everything collapsed.

Move again quickly along, you're a fly on the conference room wall of that competitor that you love to hate. This must be just before or just after the new year. They're there with the CFO and the Controller and the accounting firm. They're talking about the record year that they had and the revenue. But revenue not from what you traditionally did. Instead they're talking revenue from data. "They're monetizing data? They're a publisher now? What are you talking about?"you wonder. "I mean, that's not the business that we're in. What happened? What changed?"

And then finally, quickly into one last scene. You realize that you're looking at the front door of the house of your former shipping manager. One of the first people that you let go from your company as business started to decline. And here he is coming home late, slowly dragging himself up the front walk. Arthritic knees. Hands freezing cold. Trying to shake off the cold after a day as a UPS helper. He never bounced back after you let him go. And he was a professional in your operation. And now he's struggling to try to find a place.

Suddenly, to your relief your back in bed and the the ghost is gone. It's 3:30 in the morning, but you're wide awake. You normally get up at 6:30. You had set the alarm. It doesn't matter. You realize today's got to be the day.

Today's got to be the day you dig into it and understand what happened. What went wrong? What went so disastrously wrong?

You get up. You turn on the coffee. as the coffee's brewing, it's strikes you. It's simple. I mean, after all, you're not miserly or mean or cold hearted like Scrooge. You don't need to see the misery you've afflicted on others. You haven't. You go to work every day. You work hard. You try to provide a decent place to work.

But then you remember something that you read. Actually that you read repeatedly but dismissed since you were certain your buyers were different, your company was different, and it just Y wasn't true of your industry.

What you kept reading was that buying has changed radically and industrial marketing and selling needs to change as well. But you knew that it was different in your business. Except it wasn't.

As this realization hits you, instead of heading out to the butcher or sending a neighborhood boy with a few pence off to the butcher to send the Cratchit family a fat goose and buy some toys for tiny Tim, you commit instead that this will be the year that you make your company buyer focused. By 8:00 AM you found information on the internet. You've researched CRM, marketing automation, a content marketing, industrial marketing, inside sales, sales enablement and business model innovation, a product is a service, all of these kinds of things that you've dismissed.

You're overwhelmed. You're nervous. And of course frankly, you're scared. But you've seen what the status quo yields. And you've determined not to fall prey to that.

So Happy Holidays. Best wishes for a prosperous 2018 and many years thereafter. If you're eager to grow your revenue profitably and predictably, I can tell you that organic growth is possible for industrial manufacturers. If you want to prepare for a liquidity event, that's possible too. Whatever your goals are, you can achieve the growth. But not the way you've traditionally done it.

So let's talk, whether it's before, in these waning days before 2017's over or early next year or even late next year, whenever you're ready to undertake the changes that you have seen me allude to in this video, I'm ready to chat.