If you could package the commentary on B2B content marketing from the last 5 years into a time lapse video, you'd see evolving themes. 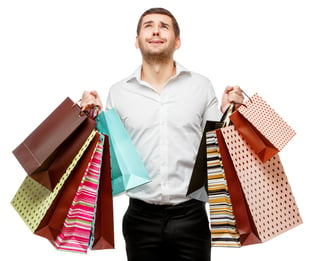 Of course there are countless subsets and diversions (video, infographics, buying journey) but at a high level the discourse has evolved from very tactical to gradually more strategic.

But that's such a subjective term...variously interpreted to mean things ranging from planning the number of blogs/week rather than just leaving it to chance, to mapping content to the entire buying journey and sales goals.

And many companies which believe they have both carefully crafted industrial marketing strategy and tactical execution plans really have neither.

They're often careening around the internet like frantic shoppers cruising the mall on Christmas Eve hoping to "see something" that they can buy....and likely simply squandering money in the process of "checking the box."

It's often said that the purpose of marketing is to increase sales.

The purpose of marketing should be to support a company's strategic goals. Generally one of those is some revenue growth metric- but they are broader. (At least they should be. Sadly SMB manufacturers often don't consider strategic elements such as diversification, valuation, inorganic growth, changing business/revenue models, disruptive technology, and demographic changes for example. Therefore the company's strategy itself is often focused on revenue and maybe product road map.)

A robust corporate strategy should dictate the key elements of the marketing strategy - and then be reflected in a tightly woven fabric of tools and interactions.

For example, if some sort of equity event is considered (after all many privately held SMBs are owned and operated by boomers who may boast of "dyeing at their desk" but will need to transition within years) then marketing must focus on not only increasing sales, but doing so in a way that simultaneously demonstrates replicability, accumulates data with an asset value, and even creates revenue growth process IP that will enhance value.

We all know that rarely happens. There the "marketing strategy" that most discuss in the context of industrial marketing is really just an execution plan - and often it's a plan that's developed in the abstract rather than built to support the company's strategy.

But...the Devil's in the details

Great strategy has to be codified into an execution plan which integrates tactics over time to deliver the required results. It also has to incorporate measurement of the right metrics to allow management of each level of the plan. After all, if you simply track visits, leads and sales then what levers should you pull, and when, to make a difference?

Then it must be rigorously and precisely executed. And the majority of companies also fail here - focusing on output (e.g. # of blog posts and social posts) rather than a tightly integrated set of activities which each incorporate multiple nuances and details to optimize results.

Many mediocre digital marketing agencies aggravate this - substituting work and following a menu of activities. Like "being busy" vs. being productive this is a poor gauge of results.

Strong inbound marketing agencies deliver effectively on the tactical execution, but very, very few tie it properly to strategy. Actually doing so requires consulting - either to elicit existing strategy from executive management or to help them develop it.

It also requires that the "industrial marketing" project be embraced by the CEO and executive management team. CMO/Director of Marketing buy-in simply isn't enough given the consequences which will arise for traditional field sales and customer service departments.

At this point some companies will defer marketing improvements thinking that doing so will forestall uncomfortable changes. That's folly. Remember, this is all being driven by changing buying behaviors and NO company will change that.

Given the evolution in buying behaviors, marketing is now part of a revenue growth continuum. That's why CEOs need to "own" revenue growth - it often involves org chart and cultural changes - and why marketing needs to incorporate skill sets which they might not traditionally have included. The recent move by Coca-Cola to eliminate the role of Global CMO and subsume that responsibility along with consumer and commercial into Chief Growth Officer role presages a change which will become common in companies as they adapt their revenue growth model to market realities.

Actual field sales, P&L responsibility, and analytics are examples of experience which marketing departments need - but rarely have. These gaps also contribute to the shortcomings on both the strategic and execution levels.

And similar gaps typically exist among consultants and agencies. Capable financial modelers may develop strategies, but if they're not tactically proficient the net result is a plan which either can't be implemented or won't be adequately translated to execution. Similarly, brilliant tacticians operating in a vacuum will deliver execution results which may contribute nothing to company strategy.

That's the core of our approach. High level global, independent director/board & P&L management perspective; extensive field sales & channel management experience; and a dirt under the fingernails familiarity with the details of digital marketing execution are combined in a single advisory model.

We typically work with B2B industrial companies that have:

We help them tie the pieces together. For instance:

We often work with companies that have decided to emphasize digital but haven't seen results. They may use HubSpot marketing software, but fail achieve significant impact. They've often worked with agencies who promised and failed to deliver.

And almost always, as manufacturers, they like building things. They want insights and experience to guide the development of their internal capabilities.

That's what we do - bridging strategy & tactics in a way that few others can; and delivering it in a package that is particularly appealing to industrial manufacturers.

Want to see if it's a fit for your business? Let's talk.