NB - this isn't a political post. However as David Meerman Scott (@DMScott) periodically points out, there are worthwhile marketing lessons to glean from watching politics.

Love him or loathe him

It's interesting that there's little middle ground among Trump's observers. But there's a`lmost ubiquitous agreement among all that Trump says things others won't. To some this as gauche - and refreshing to others. But he'll just say it.

And that's uncorked a tremendous latent frustration with a system that isn't responsive to individuals.

I believe we'll see voice given to other suppressed frustrations. Candidates to boil over?

The B2B sales and marketing alignment pot has been simmering for decades, and changes in buyer behaviors have gradually turned the burner temp up over the past several years. There are several groups that feel ignored and disenfranchised by the system - no matter how hard the software folks and sales trainers work to "fix it."

I can't predict who will become the voice of the frustrated biz dev community, but I'm predicting here that a voice will rise; that many in the marketing and sales establishment will proclaim him/her bombastic and heretical; and they will be widely derided.

But they're also going to capture a lot of people's attention. And here's why.

For as many years as there's been marketing for B2B sales, there's been friction between the disciplines. You know the basics - Marketing never generates enough leads, nor adequately qualified ones. Sales never bothers to follow up on many leads that marketing creates and misses revenue from the good ones. In industries which sell through sales channel, the channel blames the manufacturer for not generating enough leads while the mfg feels growing frustration with channel which adds little value through new projects and simply taking orders for leads they've created.

This doesn't sound very different than the frustration that's built as proficiency in the blame game has trumped results among Republicans and Democrats; progressives and conservatives; states and federal; executive and legislative; middle class and Wall Street; etc.

Most B2B top line growth efforts are slightly more functional than government these days - but not by far. And that growing frustration is limiting growth. Everyone's getting frustrated - Marketing, Sales, Management, Owners....not to mention Buyers who are often the victims of the passive aggressive (or at least incompetent) behaviors of sellers. For all the talk about sales & marketing alignment, there's very little. 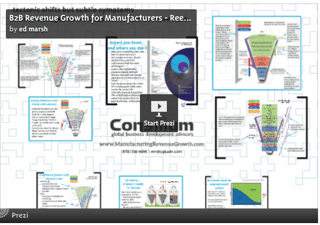 In days past industrial sales people created their own leads through cold calling, referrals and networking. But changes in buyer behaviors, driven by the internet have largely curtailed the ability of reps to generate their own leads. Further, buyers lurking in the internet shadows conduct research on their own, no longer dependent on reps for access to information. As a result:

The net result is that now not only lead generation, but much of the selling must happen virtually - without the belly button to belly button connection that was so fundamental to sales in the past.

Sellers correctly perceive that success is increasingly elusive using traditional approaches. And so the recriminations flow and the "sure fire solutions" are held to be crystal clear.  Common claims include:

And yet the gurus keep searching for the holy grail of field sales enablement in the form of the killer app.

To use another political reference...

It's not the CRM, stupid.

Field reps, particularly in the industrial manufacturing space, have a particular way of looking at the world. Irreverent, independent, money motivated, lazy, habitual and more - they will do things their way. What distinguishes successful reps is the ability to adapt and incorporate better techniques until they reach the degree of success to which they aspire. It doesn't matter how severely they're flogged.

The eruption will come

So the frustration eruption is bound to happen. Who knows whether the "Trump" like voice will rise from:

But it will come. Sales, marketing and owners will all be shocked and dismayed - and they will all have contributed to the problem with their intransigence.

But in the meantime...

While we're waiting for it to blow there's something that marketing teams can do to simply sidestep many of the hurdles. They can achieve sales & marketing alignment simply by extending a friendly, helping hand to their colleagues in sales. Here's how.

Marketing & Sales are in a three way conversation with prospects. There is no delineation from the prospect view - and one imposed by for sake of departmental responsibility is artificial and disruptive to the prospect.

Imagine wandering up to a friend of yours at a party who's having a conversation with someone you've never met....but would like to.

Your friend says "Hey there. Perfect timing. I should introduce you two ,since I'm realizing there are a lot of common interests." and proceeds to introduce you to each other and quickly lay out the key points of each others' backgrounds and interests that let you jump into a meaningful and engaging conversation.

It would be silly and awkward if your friend said "You two talk. I'm done here." and walked away - yet that's exactly what happens with most inbound lead management.

Marketing automation allows the marketing department to gradually build an understanding of prospects through directly collected, observed and inferred data points. It also allows prospects to be gradually nurtured and observed so they're not approached too quickly by sales.

But when sales contact is appropriate, many companies fail to provide all the background and nuance to the sales team. (It doesn't matter if sales had access to the information. If they don't access it, it's worthless.) The result is an awkward call - frustrating for the prospect and unfulfilling for the sales rep. Meanwhile marketing has wandered off to refill their red solo cup....

Nobody wins - but the tools are there already for an entirely more satisfactory introduction. And the critical information can be served to reps via email and text message - both mediums with which they are entirely comfortable.

All it takes is shifting the mindset from "marketing automation" to technology driven sales & marketing alignment. Download our eBook to learn more.