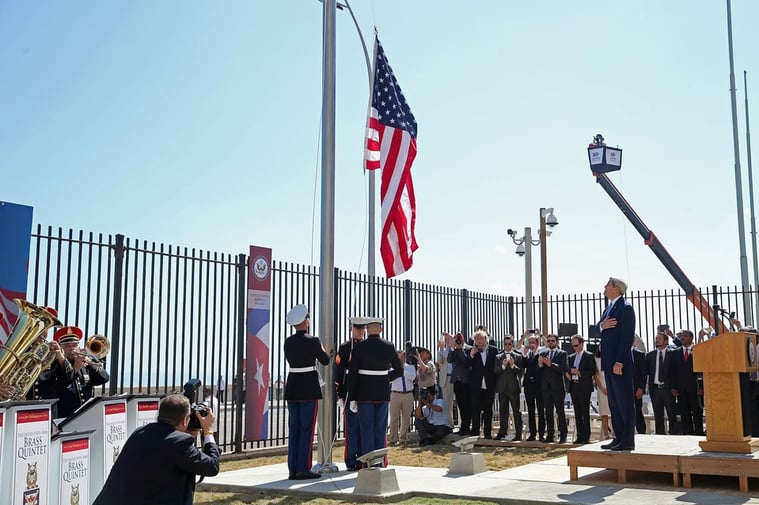 Potus & US airlines are headed to Cuba - should you?

Next month, I'll travel to Cuba to advance our progress and efforts that can improve the lives of the Cuban people.

The American embassy in Havana (CIA Factbook) has been open since August of 2015. While restrictions are still in place, they're likely to change quickly.

However, the economic embargo remains in place and must be addressed by Congress. And many American companies have found that their eagerness to participate in the market has turned into a bargaining chip for Cuban companies seeking better deals from other longer standing trading partners.

It won't be a straight line to success for most companies - but potential prosperity of Latin America as a region, and proximity to the US, it would be folly not to watch the debate and position one's company to participate at the right time in the right way.

As tourism regulations relax first, maybe a recon would be a welcome way to explore the market! Or you could send your favorite export consultant for a week of tough duty to research it on your behalf!

How about Iran (CIA Factbook)? 81MM people about to become substantially more prosperous could be a compelling opportunity. Germany's Trade Ministry ran a trade mission to Iran in July, 15 - within days of the conclusion of negotiations in Vienna.

The Associated Industries of MA trade association offered a good digest recently of considerations for companies considering trade in Iran.

It's neither wide open nor without particular risks. But if you're a company with a broad global footprint you should certainly be staying abreast of changes. Attend some webinars on evolving trade restrictions and explore some potential indirect resources in country. And ensure that you've got an export consultant who's watching the big picture on your behalf to anticipate opportunities AND challenges early enough for you to prepare.

What about the Ottoman empire?

This market possibility is a bit different - more of a short-term opportunity and a long-term strategic play.

Turkey (CIA Factbook) has been a fruitful market for many US companies over the past decade. It's been ramping up education and manufacturing, and in it's zeal to join the EU was implementing a number of changes to in pursuit of approval and hope of EU accession.

Of course the EU situation has changed - now as countries debate it's merits (and some even discuss leaving e.g. the Brexit debate) the shine seems to have come off the EU apple. But coincidentally Turkey's millenials old strategic importance as the gateway between East & West is of renewed importance.

Suddenly the Russia, Central Asia and the Middle East are in turmoil as Southern Europe struggles with immigration and economic burdens. Turkey, sitting at the center of all this turmoil faces risks, but is positioned for influence and prosperity at the hub of the Ottoman / Byzantine reach over which it historically stood astride.

So it's a commercially viable market today - and could be a gateway (through indirect sales and growth of Turkish trade) to vastly expanded regions.

Might not be a bad idea to develop a footprint and establish a market presence and savvy.

The role of an export consultant

If you're looking for technical compliance expertise, there's lots of that around. If you want tips on how to find the right channel partner, there are fewer real experts, but still plenty of folks with personal experience.

But for strong industrial manufacturing companies more important than another "technician" is a business person with savvy and vision. That's the skill set that a great export consultant should deliver. Is that what you're getting?

There's no intrinsic value in simply selling some internationally. However, there's enormous value in appropriate, profitable diversification. Wish you had that? Let's talk. Just fill in four quick fields below, and I'll be in touch. Want something in the meantime? Check out my Guide to an Export Dirty Dozen - 12 things even experienced exporters often overlook.