Do you export to Nigeria? Should you? The good, bad & ugly

Is Nigeria at the top of your export targets list?  Should it be?  What do you know about the risks and opportunities?  If you simply follow the news, you probably have an exaggerated sense of the former, and little insight into the latter!

What's the first thing that comes to mind when you think of Nigeria?

Honestly?  Probably not the latter.  (Interested in seeing a video promotion of this new mall?  View on YouTube)

Corruption and insecurity.  There's no secret.

Boko Haram has ravaged the country for the past several years - long before #SaveOurGirls was widely circulated.  And MEND (Movement for the Emancipation of the Nigerian Delta) has been co opted with oil revenue, but had previously disrupted economic progress in the south.

The country's proximity to Mali, Niger and other areas of insecurity, and porous borders, complicates the security challenge.

And the corruption is epic.  Trace International recently labeled Nigeria as the MOST corrupt country in the world.

With vigorous FCPA enforcement, that's not a small consideration for US companies.

(Interested in the challenge of corruption in general in global business?  Join the @FITTNews #TradeElite tweet chat on Thursday, 7 May 2:30-3:30PM EDT.  I'll be moderating what's sure to be an interesting conversation with some high power panelists including @AlexandraWrage, @MikeVolkov20 & @RichardBistrong.)

Nigeria is naturally divided by religion, economic development and natural resources distribution.  Therefore the environment for conflict and instability will persist.

Further, oil revenue is absolutely fundamental to the government's short & medium term objectives of improving infrastructure and broad economic opportunity.  As long as oil remains below $80-90/bl the government will be challenged to implement important steps.

But demographics and the recent, remarkably smooth election bode well for the country.

Nigeria just concluded it's smoothest election since it's second period of democracy (after military rule) began in 1999.  A former general, Buhari, won what seems to be the cleanest election imaginable given the circumstances.  He drew wide support from the north (generally Muslim) and the south (generally Christian) and is known to be vehemently anti-corruption.  The electorate has high hopes that his military credentials will inform his campaign against Boko Haram, returning basic security to the country, and that his resolve to eliminate corruption will allow government investments to entirely support common goals rather than personally enrich those in power.

It iis the largest country in Africa by population (approx 175,000,000), and the economy recently overtook S. Africa as the largest on the continent.

Demographically, Nigeria is young and vibrant (approx 60% of population is under 25) and is expected to grow.  The UN predicts the Nigerian population will be 440MM by 2050.

Although many West African countries are francophone due to their French colonial legacy, Nigeria (and Ghana) as former English colonies are generally English speaking (along with local/tribal languages.)

I'm a huge proponent of using digital marketing to grow globally - both domestically and internationally.  And that sort of connectivity, internet penetration, youthful enthusiasm and growing consumption create the perfect environment for doing so.

Based on my experience there over the past couple years, I'm excited about the opportunity.

I've written before about the importance of demographics, using the analogy of Wayne Gretzky's recipe of success to skate where the puck will be....not where it is.  There's no guarantee, but there are many reasons to confidently predict that the puck will be in Nigeria - it's probably time to start skating that way.

It's not a rookie market.  Don't launch your export efforts there.  But over the next couple years, as you diversify globally across regions and seek opportunities for breakout growth, it should be on your list.  There aren't too many "emerging market" opportunities left - most are now developing.  Nigeria may be a real emerging opportunity.

Likely in response to the election conduct and reasonable outcome, the US government is renewing focus on the market as well.  @exportgov has recently announced several resources as I recently noted.

Want to learn more about how Africa, and Nigeria can compliment your global sales initiative?  Download our free report on the African Market Opportunity for US Exporters. 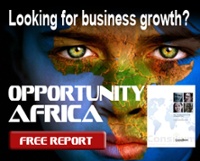