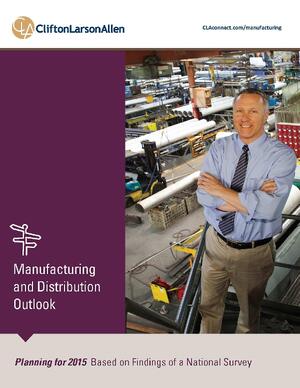 Accounting firm CliftonLarsonAllen recently released it's "M&D Outlook 2015" report which featured results of its extensive survey of manufacturers.  It contained some noteworthy data for manufacturing companies.

Here's what jumps out.  M&D companies have a toolbox filled with hammers (operational execution tools.)  And so guess which problems they're working on?  Those that look like nails!

Industrial B2B, manufacturing & distribution companies are great at making stuff.  If you had good stuff you used to be able to sell it.  That's changed.  But growth strategy typically hasn't.

But the natural inclination when you're under pressure is to return to your areas of expertise.  And that's what this survey data illustrates.  Companies that are most concerned about the impact of pricing and margin compression on their business viability are going to....wait for it....add plant capacity.  What?

Of course there's a rationale that increasing capacity will allow you to drive down unit costs and respond to pricing and margin pressures.  But in order for that to work, you've got to economically sell the new volume (leverage the capacity without increasing your SG&A disproportionally to do so).  Otherwise you end up with a larger burden of fixed costs which exacerbate the challenge.

A viable growth strategy for manufacturers

What's needed is a workable plan that feels comfortable and targets the fundamental issues.

It's not complicated - it's complex.  And it's an approach which companies naturally focused on operations can embrace....if they will be introspective enough to recognize the dissonance between their concerns and their business investment plans.

You ready to actually focus on the areas that worry you...but you've been unsure how to tackle?  Let's talk, and start by downloading our free eBook on revenue growth for manufacturers.