Why Are Industrial Sales Forecasts and Projections Unreliable?

Tl;dr - Most companies tolerate chronic material inaccuracy in their sales forecasts. This creates costly complications. Further, most companies build sales projections on biased assumptions. This normally doesn't create problems....until it does. These are two primary causes of unreliability in industrial sales forecasting and sales projections, and they lead inexorably to inefficiencies that often have costly complications.

There are two reasons.

First, poor sales execution in opportunity qualification and selling. In other words, whether the deals your team says will close, do, at the time and for the amount predicted.

Second, faulty assumptions built into projections. Management either assumes that what has been will be, or they strategically view the market to anticipate emerging and growing opportunities and to reduce dependence on shrinking sectors. In other words, are the aggregate sales projections for the year realistic and appropriate.

More on those causes below, but first let's be realistic about the disruption this causes. In many B2B industrial companies missed forecasts and projections have become so routine that there's little resulting embarrassment or organization angst. The fact that it's common, however, doesn't minimize the impact.

Poor forecasts cause friction with lenders and shareholders (nobody wants to bump against loan covenants because of sales guesses!); disruption for manufacturing and planning; problems with legitimate buyers who look elsewhere because of competition for manufacturing slots and lead-times; and loss of credibility for the sales department among their colleagues.

There are always excuses and lack of responsibility; blame market conditions, competitors, and unpredictable or irrational buyers. Yet you know that every company operates in the same market environment, and no buyer has made their decision randomly. Sales has failed to learn how the decision will be made, by whom, and when - and if they're making it naively, to do the sales job! If they'd done so, the forecast would be accurate.

Name any other department that would receive the same grace for consistent failure! Yet because it's so commonly excused for sales it's a rare company that tries to quantify the costs or make more than superficial efforts at improvement.

That doesn't mean we should or must accept it.

Because unreliable forecasting is so common, you might not even consciously identify it as a problem. It feels like routine business. Nevertheless, it creates challenges and frustration. You might recognize common symptoms that include:

Most responsibility for unreliability in forecasts lies at the feet of sales management. They're the ones who should be reinforcing qualification criteria, enforcing sales process, training, coaching, debriefing, and challenging sales reps on the activities that support accurate forecasts. If some reps are incapable or consistently unwilling to execute as coached, then sales management owns the responsibility for replacing them.

Of course, those aren't acceptable excuses. Management needs to ask probing questions to fully qualify deals, and train reps to ask them effectively. They should create opportunity maps to codify all the criteria which inform qualification, and in turn the forecast. CRM systems should have pipelines built with non-negotiable confirmation criteria at each stage - including all buyers, capital approval criteria, justification process, full buying team, and more.

Everyone involved in the process should be clear-eyed and realistic about every opportunity. Process, rigor, and skepticism are critical to accurate forecasts at the sales rep and sales force level.

Pro tip - If you're wondering whether your salespeople and managers are capable of really bringing this rigor to the process, it might be time to consider scientific (not personality!) evaluations of the sales force's capability and potential. We can help. Learn more here.

That's the piece that companies can most effectively control. But it's not the only one.

Biases and Assumptions Embedded in Your Projections

So tonight I'm gonna party like it's nineteen ninety-nine (Prince1)

Nearly all industrial sales projections (the big picture forecast) are constructed around a linear extrapolation of recent years' sales with adjustments. (e.g. last year plus 3%.)

That produces projections built on Recency and Normalcy biases.

Despite the contemporary use of the term, not all bias is bad. It's a mental habit that saves us time and energy so we don't exhaust ourselves with unnecessary analysis. The key is to recognize and acknowledge your bias and, if necessary, compensate for it.

For most capital equipment builders and industrial manufacturers, those biases haven't caused significant problems for the last couple decades. That means that they've been validated in a sense, and they're even more deeply embedded! Certainly there have been disruptions in niche industries and geographical markets. '09 was sobering for many, but not a fundamental crisis. That doesn't equal stasis.

Change happens gradually, then suddenly. And we have some tools to predict how that might happen. Neil Howe's 4th Turning which I've written about before provides some interesting perspective. We're in the midst, as Howe predicted, of a period of turmoil - a 4th Turning. The specific names and triggers almost don't matter - we're due for some significant disruption that will likely result in a rather changed business environment on the other side.

It's hard to predict what that looks like. It won't necessarily be bad. Perhaps a sizable "reshoring" trend will create large opportunities for capital equipment companies here in the US. On the other hand, it's also possible that our rare earth demand will far exceed supply, and many manufacturing functions will be constrained.

The point is that we don't know. That we can't accurately predict doesn't relieve us of trying to understand the changes that might occur, at least directionally if we can't anticipate magnitude.

This image, courtesy of Bruce Mehlman via Mehlman Castagnetti2, offers an eye-opening comparison of high-level market factors. It compares the last 30 years with what's emerging now, and will likely last for the next generation.

It's hard to look at this and not pause to ponder how things might change. 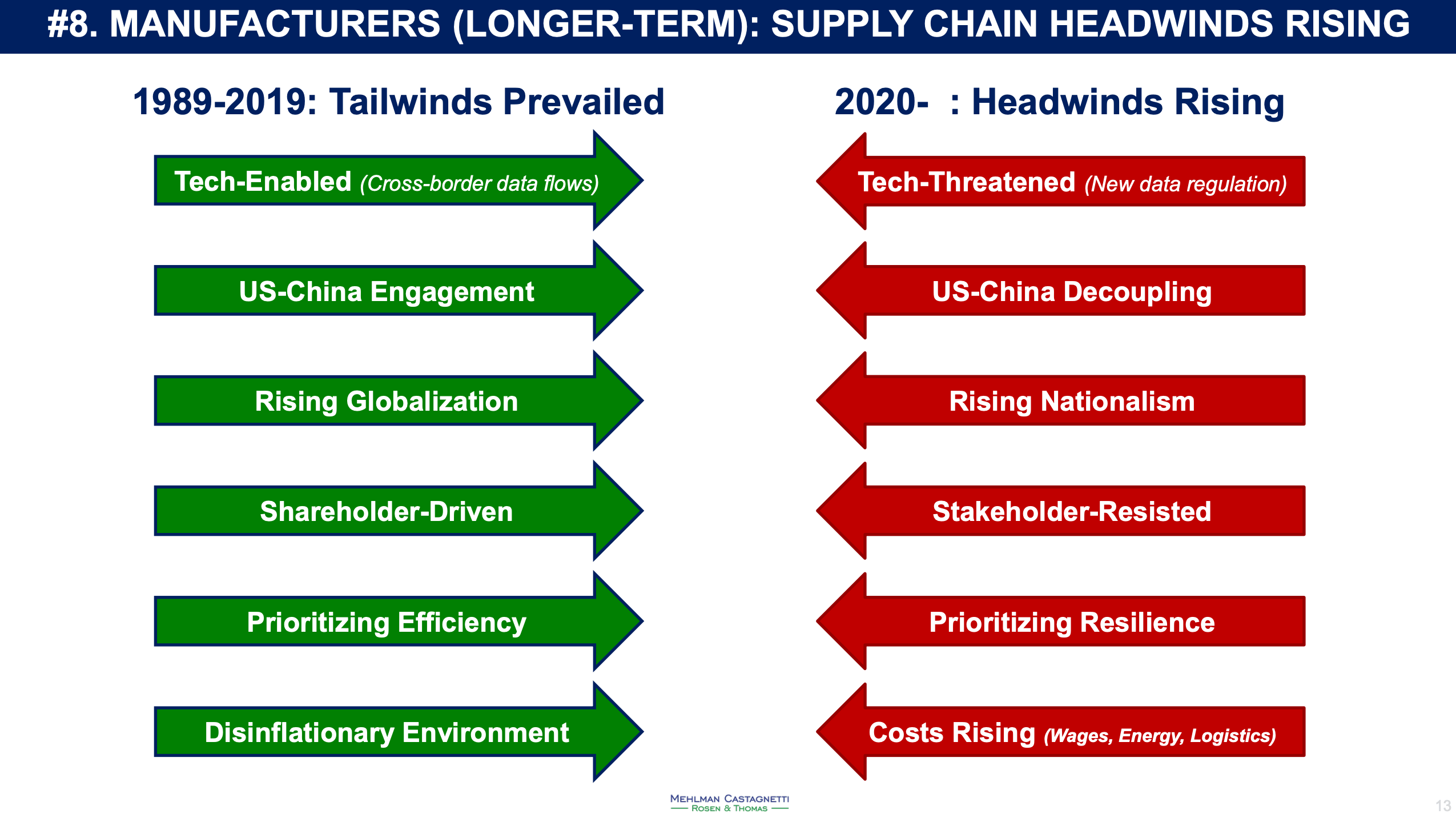 Mehlman could be completely wrong (although he has a pretty solid track record.) We don't know.

But the point is that these macro headwinds will likely impact your business. It's appropriate for management to consider these sorts of trends and factors in developing projections.

If we're going to hold our sales management and reps accountable for accuracy in their forecasting, then we also need to expect the same of our corporate forecasts.

Forecasting is More Science Than Art

Of course, there are unknowns inherent in every forecast. And sometimes forecasts and projections will be inaccurate despite careful attention to detail and rigorous preparation. That doesn't mean we shouldn't work to be as reliable and accurate as possible - both at the sales force and corporate level.

Too many companies have simply resigned themselves to unreliable forecasts. They squander hours preparing separate reports with commentary and opinion.

Industrial companies have it pretty easy compared to tech. In the latter, it's not unusual to have board members on weekly forecast calls of rapid growth Series A tech businesses. In industrial sales, a sales manager often has a casual monthly pipeline review. But there are lessons and best practices to learn from that intensity of expectation which we can apply to industrial businesses to improve results.