Fakes & counterfeits - Should you launch your global sales in China?

It's not a fluke

You heard about the fake Apple store, how about the entire fake Ikea?


It seems that Kunming in the southwest corner of China is the world capital of knock-off shops.

Apple recently found five counterfeit versions of its stores there after blogger BirdAbroad posted photos of one online - and now a fake Ikea has surfaced.

It's called 11 Furniture and is a 10,000 square metre, four-storey replica that's virtually identical to the Swedish-made version.

It copies Ikea's blue-and-yellow colour scheme, mock-up rooms, miniature pencils, signage and even its rocking chair designs. Its cafeteria-style restaurant, complete with minimalist wooden tables, has a familiar look, although the menu features Chinese-style braised minced pork and eggs instead of Ikea's Swedish meatballs and salmon.

Citing the painful 11-hour time difference between China and Brazil - meaning games kick-off sometime between midnight and 06:00 - the article suggested that opportunistic online wheeler-dealers were offering the fraudulent diagnoses to enable fans to take the day off.

And amid several stories of "fake" government officials from last week, the best was the audacious creation of an entire fake government structure!

It will go down as one of the most audacious attempts at Chinese fakery yet: a bid to forge an entire government.

Are all emerging markets equal?

Of course not.  Each has challenges and each has opportunities.  But one of the first mistakes many companies make when they consider global expansion is to first focus on headlines and population.

The former seems to compel expansion into the BRICs.  But why?  Are you chasing sexy news stories or profitable business growth?

The latter lures companies to pockets of large population without regard to how the diversity of that population actually creates functionally disparate markets to be managed individually, or even how aging trends and consumption habits impact the opportunity for given products and a medium term market opportunity.


What to look for in a market

High level criteria include:
Are demographics important?  Absolutely.  But keep in mind that if your goal is to grow beyond the 350MM domestic US market, then a market of 75MM with 60% comparable purchasing power represents a 13% growth opportunity.  A diversified group of five of those in turn represents 65% growth.

And you could well do that without a single 1B person market.


How substantial is the risk?

There are a host of real, and innumerable imagined and overhyped risks of global expansion.  Nearly all can be inexpensively and reasonably mitigated.

The biggest is general business/strategy risk - and the best mitigation for that is simply common sense.

If you realize that China is really like 5 or more distinct markets; that fakery is endemic across multiple aspects of the market; that many SMBs have stalled their export growth there; that it will take 5 years to get traction and that regulations are very difficult to understand as an American business person....why would that top your list?

The risks in the BRICs are larger than in emerging markets in general - why assume them when so many other compelling opportunities beckon!!??

Check out some of our info on where to go first. 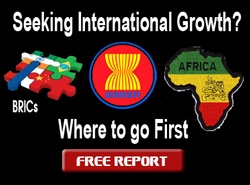