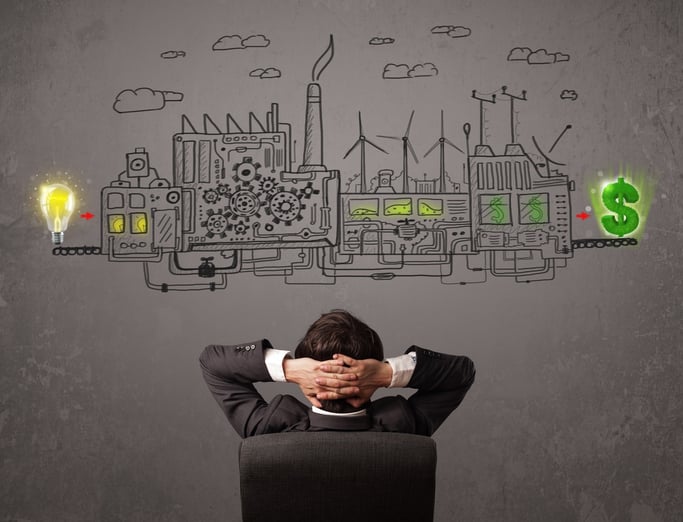 Nobody buys a machine because of a tax break

In other words, companies are more inclined to invest in growth than they have been for some years - and the major drivers are growing demand on the one hand, and lower anxiety about regulatory headwinds on the other.

And now we add the tax bill (The Tax Cuts Act). Companies have an opportunity to proactively help prospects understand how they can benefit from the terms of the tax bill - and boost capital equipment sales in the process. This is a mutual win.

The obligatory note - this isn't tax advice for you, or your customers. Check with professionals on whom you rely. The purpose of this article is to frame how you think about the current market opportunity to grow your sales and help your customers' leverage the opportunity to their benefit.

Here's a tease - your customers could end up cash positive in year one by buying your machine PLUS realize all the business benefits that makes the purchase itself appealing.

And as Peggy Noonan wrote recently, companies have a chance to "make a difference."

They can in some new way see themselves as citizens—as members of America, as people with a stake in this nation, a responsibility for it. They can broaden, invest, hire, expand and start the kinds of projects that take the breath away. They can literally get young men and women out of the house, into the workplace, learning something. They can change and save lives.

Finally, different state tax structures can impact the bottom line in other ways that vary widely.

I won't dive deeply into these factors, but they do create some differences that may be important to understand depending on who you're selling to.

If you're not familiar with accrual accounting, you can learn more about depreciation here. The short version is that a company pays all the cash for a new machine, but is only allowed to deduct a portion of the cost from its taxable income. In other words, they've paid for the whole thing and don't have the cash available, but for tax purposes they're assumed to only have paid a fractional percentage each year from 7 or 20 years. It makes capital investment tougher for privately held business that doesn't have access to public capital and debt markets.

The tax bill actually increases the functional cost of your machinery and automation to buyers. How can that be you ask?

For your publicly held customers, the functional cost will increase even more dramatically. As rates fall from 35 to 21% the net cost (vs. simply holding the cash) goes from $65K to 79K - a 22% functional bump.

But...of course nobody makes capital investment to reduce tax exposure as a primary objective. Instead that investment is made for other reasons which include new production, increased output, reduced operating cost, shorter lead-times, higher quality, etc.

So let's look at the implications from the perspective of your customers that see opportunities to grow sales or improve profitability by investing in your equipment.

For the publicly traded firm the first year cost will go from roughly $445K to about $290. (Although to present favorable earnings to the market they'll likely continue to reflect only a $14K depreciation cost in their GAAP reporting.)

That leaves an additional $125K and $155K in the pass through and public company's bank accounts respectively. That could be held as a safety reserve, or invested in additional equipment, staff, R&D, marketing, etc. They've realized the same increase in capacity or reduction in operating cost, but at a much lower cash cost.

So, for the owner of the private company who may actually balance capital investment against college tuition payments, etc., this could make desired upgrades feasible where they simply weren't in the past....or where the status-quo was just a bit safer. It may be that simple!

Typically, however, when a company implements new capacity it takes some time to leverage it. Costs come down gradually as the operation is optimized, and new capacity takes time to fill as it's gradually sold. So the calculation, or rather the gut check for an owner, may be more complex.

That creates an interesting opportunity with capitalized leasing.

In the 90s leasing was quite popular as companies used the vehicle to make what were essentially installment purchases that were characterized as operating expenses. That allowed them to fully deduct the amounts they were paying.

The IRS began to crack down however, distinguishing between operating leases (you use it for a couple years and then send it back - having paid only for your use and the decline in value as a result, plus some carrying cost) and capitalized leases (often buy it for $1 at the end of the term.) This is an important distinction because of the impact on reported profits and tax collection as discussed above in the context of bonus depreciation.

Here's where the tax changes could be really impactful for SMB manufacturers.

With interest rates still quite low, the cost of funds is not a significant factor in many short term decisions. In other words it's cheap to borrow and lease. So a typical pass through could use that to enormous advantage to bridge the ramp-up time until the investment pays off. Here's how.

Even more startling is the actual net positive. Had they not bought the machine they would have paid $30oK (30% tax on all the profit.)

Buying the machine in this example, realizing bonus depreciation and using a capitalized lease, is actually a $15K cash boon from the company perspective.

They have more cash AND they have the new capacity/technology/efficiency.

Your sales people aren't accountants. Neither are many pass through business owners. Capital equipment sales are built on a sound understanding of customers' "jobs to be done." Nothing changes that or the basics of salesmanship.

However, most of my clients and similar companies find the biggest competitor they face today is the status quo. Folks want to make investment, but just aren't completely convinced that the benefit outweighs the risk.

The tax bill enhances the benefit, and reduces the risk by reducing net cost today (to the extent that the asset could be resold later if necessary.)

That makes the transaction itself perhaps more advantageous.

But further, we know that buyers ascribe more value to sellers that help them with insights. Here's an opportunity to supplement your "jobs to be done" insights with transactional ones.

I'd recommend finding a leasing partner (you probably have at least 5 calling every week) and make the process simple. (They'll pay you immediately, often including progress payments, and own the long-term debt and risk.) Work with your accountant and marketing team to develop a simple one to two page overview of how the tax bill changes prospects' net procurement cost, and how leasing can actually be net cash positive in year one.

And start fast. Why?

The tax bill is likely to lead to rapid growth. Adding the capacity early means that as consumption grows your customers will be better positioned to grab market share from overwhelmed competitors that were slow to react.

And all those stalled deals, no decisions and open projects are a perfect place to start!

Similarly, for companies like yours, you want to start ramping up your lead generation early too, in support of capital equipment sales which will likely grow. As companies start to invest to meet the actual or anticipated growth, they'll be looking for solutions.

That means actively working on:

That requires a highly refined digital presence, a deep strategy and rigorous execution.

Buyer intent data is an incredible tool to supplement the core work in all three areas.

Want to explore how to use the tax bill to position your company and your team for rapid capital equipment sales success? Or to take a bigger picture look at positioning yourselves for strong growth on a solid, global, digital base? Let's schedule an introductory conversation.